E-Rally Monte-Carlo 2021 :  Back on the highlights of this 5th edition

Besides the 60th anniversary of the victory of Per Malling and Gunnar Fadum’s Sunbeam Talbot Mk III in 1955, the 18th edition of Rallye Monte-Carlo Historique will enable the competitors from all around the world to fight over a reformated race, as wished by the Organising Committee of Automobile Club de Monaco .

The first changes – in order to give a fair chance to every competitor – concern the averages to be respected. Therefore, two major decisions were taken for this 2015 edition. There will be three averages different from one another: low, intermediary and high. Moreover, the Selection Committee will determine which cars can be accepted in low or intermediary for the ones who asked. Those three averages will be kept all along. We remind you, once again, that this Rally is opened to all the cars which participated in Rallyes Automobiles Monte-Carlo between 1955 and 1980.

The ”kick starting” of the 18th Rallye Monte-Carlo Historique will be given on Wednesday, 28th January 2015, with the administrative checks and scrutineering in the five cities of departure. On the same evening, teams located in Glasgow will start the Concentration Routes. Then, the competitors in Copenhagen will leave on Thursday, 29th January, followed the next day (Friday, 30th ) by the crews coming from Torino, Barcelona and Reims. After driving around 788 to 2263 kilometres throughout Europe, the competitors will be reunited in Saint-André-les-Alpes on Saturday, 31st January to race, as a prologue, the very first Regularity Zone (ZR) “Saint-Jean-la-Rivière – Levens” by Duranus village. They will then drive toward the Principality of Monaco for a first night of well-deserved rest, after a very long and exhausting concentration route.

The very next day, Sunday 1st February, will be the start of the Classification Leg beginning with “Pont de Clans – Tournefort – Massoins – Villars/Var” and its often iced and slippery valleys. Digne-les-Bains will then welcome, Place du Général de Gaulle, a route check-point highly anticipated by the fans. Then, direction “Selonnet – Turriers” for a first classic via Col des Garcinets. Renowned place of motor-sports in Dauphiné, Clelles-Mens train station will play a role of transition during midday between the southern pre-Alps and Vercors before the competitors go on with “Chichilianne – Col de Menée – Les Nonières” and “La Cime du Mas – Col de Carri – Col de l’Echarasson – Saint-Jean-en-Royans”. The last halt of the day will be on the nautical base of Saint-Nazaire-en-Royans for a concluding route check-point, before going to the Champ de Mars of the host city, Valence.

On Monday, 2nd February will start the first part of the Common Leg with a lavish local menu. Therefore, with the 60 kilometres which grants this race the title of longest regularity zone of this edition 2015, “Saint Pierreville – Saint-Etienne-de-Serres – Saint-Julien-du-Gua – Col de la Fayolle – Col de 4 Vios – Mézilhac – Le Cheylard” will be a Justice of the Peace, same thing for “Burzet – Sagnes & Goudoulet – Lachamp-Raphaël – Saint-Martial”. The midday break will occur in Saint-Agrève market where a tasting of local products will be organised for the competitors before they go on with two well-known ZR “Col du Faux – Col du Buisson – Labatie d’Andaure” first time this way and “Lamastre – Gilhoc-sur-Ormèze – Barbatier – Plats”, extended and rethinked for this 2015 edition. Then, back to Valence via a halt in Tournon-sur-Rhône where many festivities are already scheduled on Quai Farconnet.

The second part of the Common Leg will start Tuesday, 3rd February at dawn with two legendary pieces of Drôme Provençale “Saint-Nazaire-le-Désert – Col des Roustands – La Motte Chalancon” and “Verclause – Col du Reychasset – Laborel- Col Saint-Jean – Eygalayes”. There will be no rest for the competitors, who, after a 150km road transport throughout Drôme, Alpes de Haute Provence and Alpes-Maritimes will departure at midday in the grand classic of “Puget-Théniers – Col Saint-Raphaël – Toudon – Tourette-du-Château”. The final check-point before the entry in Parc Fermé de Monaco will occur in Place Neuve in la Turbie early in the afternoon. 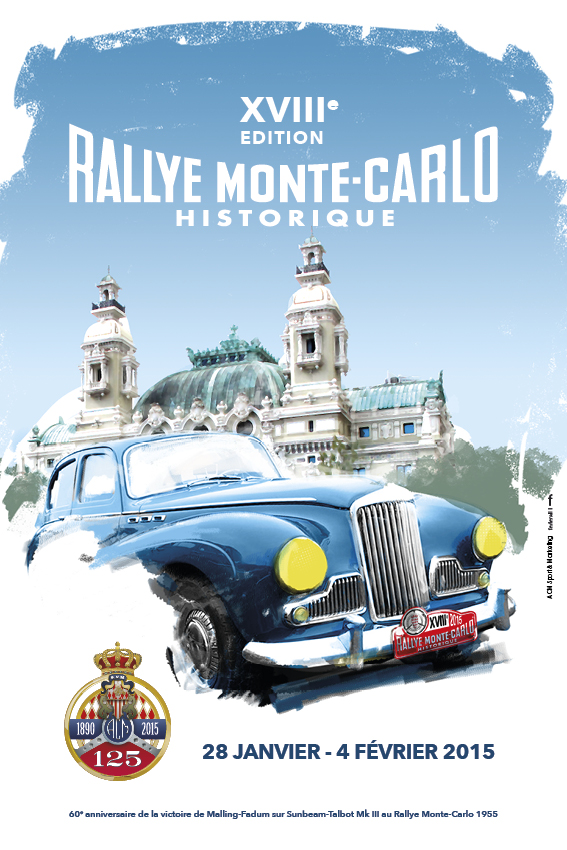