Paris and Monaco 10 May 2021 – Louis Vuitton and the Automobile Club de Monaco announce a multi-year partnership and present an unprecedented Trophy Travel Case for the Formula 1 Grand Prix de Monaco™.

Hand-crafted in the House’s historic Asnières workshop on the outskirts of Paris, the trunk showcases Louis Vuitton’s traditional know-how while drawing inspiration from the heritage of the Formula 1 Grand Prix de Monaco™ , celebrating its 78th edition this year. The iconic Monogram canvas is adorned with the red shade of the Monaco flag while the red lines, tracing the “V” for “Victory”, are rimmed with a white strip, reminiscent of the unique urban route of the track where driving excellence goes hand in hand with power and precision. This tailor-made trunk, in the colours of the Principality, will hold the trophy depicting the 19 turns of the 3.337-km track. The trophy will be awarded to the winner of the prestigious Formula 1 Grand Prix de Monaco™ on 23 May 2021.

This partnership marks the very first encounter between the iconic French House and the Organiser of the most legendary of Formula 1 races, united by the values of tradition, transmission, and excellence, which have always been cherished by both. Held by the Automobile Club de Monaco (ACM) and under the High Patronage of Prince Albert II, the Formula 1 Grand Prix de Monaco™ is one of the most glamorous and widely viewed events in the entire world.

“Fangio, Hill, Moss, Stewart, Senna, Prost, Schumacher or more recently Alonso, Vettel, Rosberg, Ricciardo or Hamilton, the Monaco Grand Prix has celebrated the greatest champions. At almost 300 km/h between the rails, it’s the Formula 1 Grand Prix that all drivers aspire to win one day. Today, we are proud to be associated with the race and to together start writing a piece of history. The Trophy trunk epitomizes ‘Victory travels in Louis Vuitton’ – witnessing the next victories and continuing to carry legends!”” says Michael Burke, Louis Vuitton Chairman and CEO.

According to Michel Boeri, President of Automobile Club de Monaco: “Apart from being a major partnership with the famous brand of the LVMH Group, we are delighted that the trophy awarding the winner of the Formula 1 Grand Prix de Monaco™ can now safely travel in “first class”. Louis Vuitton and Automobile Club de Monaco are at once forerunners and project supervisors in their respective fields of expertise. Louis Vuitton is associated with the most coveted trophies in the World. And this emblematic partnership allows the Formula 1 Grand Prix de Monaco™ Cup to benefit from this heritage bringing unprecedented elegance into the world of Mechanical Sports…”. 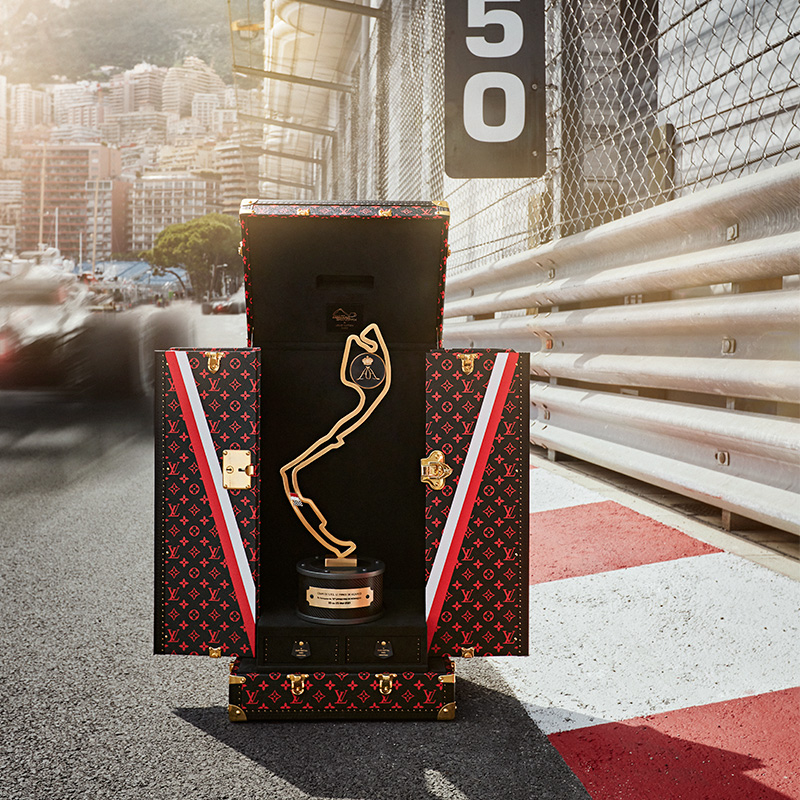 Since 1854, Louis Vuitton has brought unique designs to the world, combining innovation with style, always aiming for the finest quality. Today, the House remains faithful to the spirit of its founder, Louis Vuitton, who invented a genuine “Art of Travel” through luggage, bags and accessories which were as creative as they were elegant and practical. Since then, audacity has shaped the story of Louis Vuitton. Faithful to its heritage, Louis Vuitton has opened its doors to architects, artists and designers across the years, all the while developing disciplines such as ready-towear, shoes, accessories, watches, jewellery and fragrance. These carefully created products are testament to Louis Vuitton’s commitment to fine craftsmanship.

Formula 1 Grand Prix de Monaco™ is considered by fans to be the most important and prestigious car race in the world, along with Indianapolis 500 and the 24 Hours of Le Mans. Since its creation in 1929, pilots have always relished the challenge of driving on a narrow track on the streets of the Monaco Principality, with its uneven ground, its sharp turns and famous tunnel, which has made them real gladiators over the years. It is certainly one of the most challenging tracks in the Formula 1™ calendar, one that pilots and teams absolutely wish to add to their list of victories…