Mattia Binotto will leave his position as Ferrari team principal at the end of 2022 ... See MoreSee Less

When this happens, it's usually because the owner only shared it with a small group of people, changed who can see it or it's been deleted.
View on Facebook
· Share

The qualifying session for the 5th Monaco E-Prix that took place late Saturday morning, has been as exciting as expected, with most of the best drivers qualifying in the Top 8.  This was as competitive as the final rounds at the Rolex Monte-Carlo Masters.

A few minutes later in Group B, Mitch Evans (Jaguar), Nyck de Vries (Mercedes-EQ), Andre Lotterer (Porsche) and Robin Frijns (Envision) earned their place in the Top 8, but there was some damage. Antonio Félix Da Costa (DS Techeetah) and Jake Dennis (Andretti), who hit the barrier at Sainte Dévote, were eliminated, as was Oliver Rowland (Mahindra). Enough to ensure sensational quarter-finals between most of the candidates for the world title, even though we are only in the 6th round of this fierce Season 8.

Vandoorne first beat Frijns, the only driver with Lotterer to have qualified for all phases of duels since the start of the season, then Wehrlein beat Lotterer after an internal fight between both Porsche drivers. The biggest clash of these quarter-finals pitted JEV, the one and only double Formula E champion, against de Vries, the reigning World Champion. The championship leader narrowly won, with his sights set on a semi-final against Evans, who beat di Grassi, another former Formula E champion.

The relative surprise came from the semi-finals, because Wehrlein, the winner in Mexico for Porsche, beat Vandoorne in his Mercedes, then Evans, author of a sumptuous double blow in Rome (2 wins), beat Vergne, who will therefore start on the second row at 3pm. He is aiming for the podium at the minimum, if the circumstances of the race turn in his favour.

All was left to play in the grand finale, over a single lap of 3.3 km, with fully charged batteries, and the fans were not disappointed by this top-of-the-range aperitif: pole was snatched by Evans, the New Zealander from Jaguar, with the added bonus of a new track record in Formula E (1:29.839) and the first driver to complete the lap in less than 1:30 in a fully electric single-seater.

This is the first pole position for the Kiwi driver since Santiago de Chile, in January 2020, and as you may all know, pole position is always a good thing in Monaco: since the very first edition in 2015, the winner of each and every Monaco E-Prix has started from pole position. The show will start at 3pm! 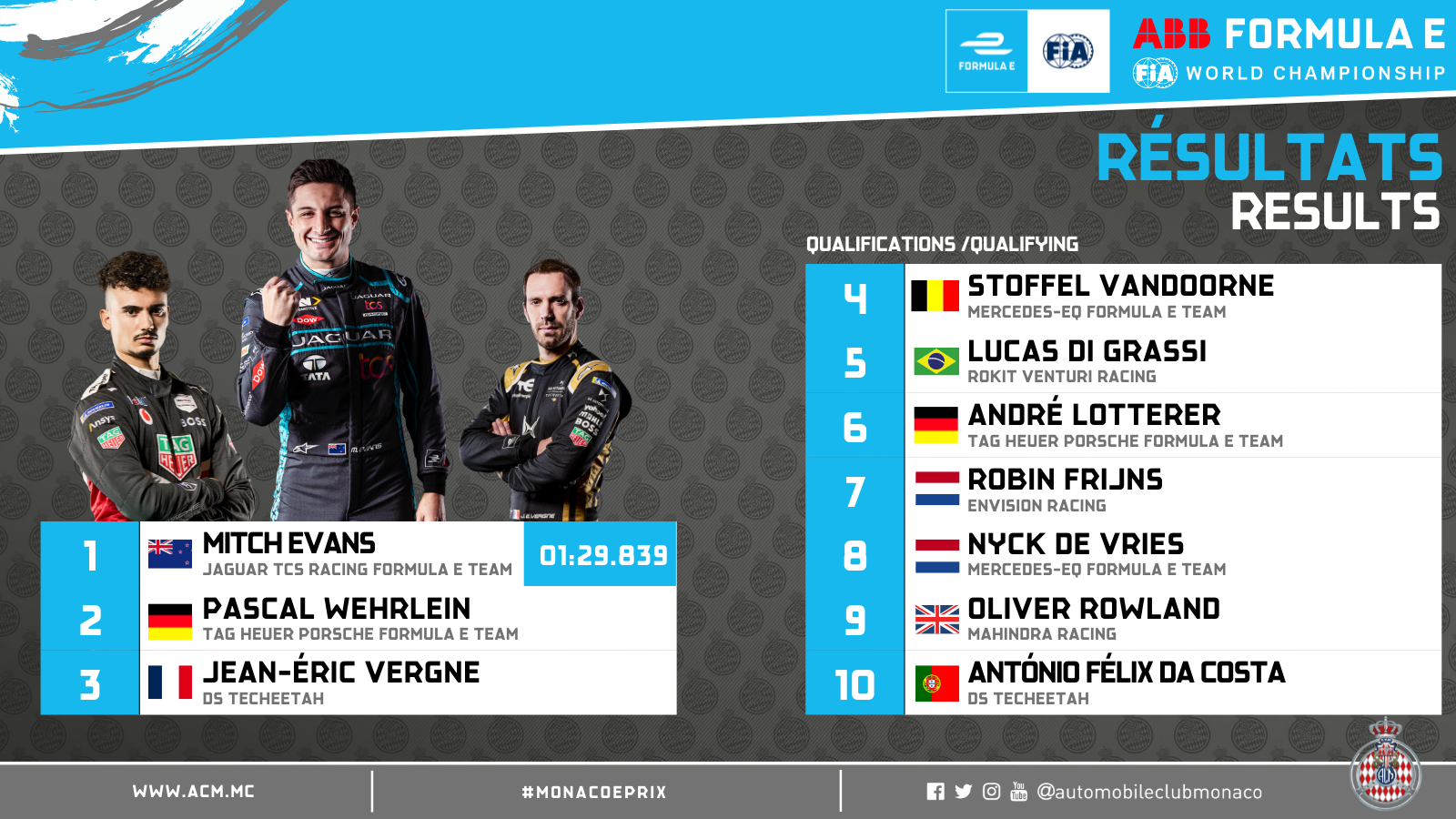