The reigning Porsche Supercup champion, Larry ten Voorde, is on track to do it again in the streets of Monaco: he set the fastest time in qualifying on Friday and will start from pole position on Sunday at noon, with the surprising Briton Harry King just behind him. A time of 1:34.500 was enough for the Dutchman in his orange and black Porsche to beat King and the best Frenchman in the Supercup, Dorian Boccolacci, 3rd in these qualifications and 3rd in the race last year for his Porsche Supercup debut in the streets of the Principality.

Victory should be decided on Sunday between these three drivers and the next three on the grid will be serious candidates for a podium position: German Laurin Heinrich (4th), who hit the safety barrier and caused a short-lived red flag, at the end of the session, Luxemburg’s Dylan Pereira (5th), who won last month at Imola, and another German, Michael Ammermüller (6th), winner here in Monaco in 2019.

After Heinrich’s soft touch on the wall, the Automobile Club de Monaco (ACM) marshals, as efficient as always, intervened very quickly and enabled this session to end in style, with ten Voorde’s best time and the 3rd one for Boccolacci. Very promising for Sunday, when the most awaited race of this historic season, that of the 30th anniversary of the Porsche Mobil1 Supercup, will start at noon, for 17 laps (or 30 minutes maximum). 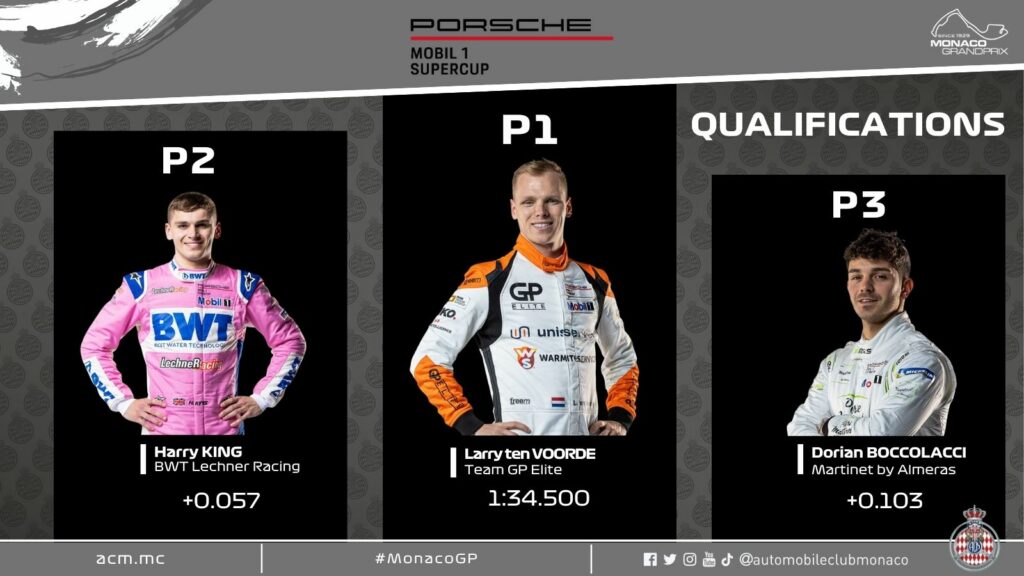