Accueil » Vandoorne wins the 5th Monaco E-Prix, a first and last for Mercedes-EQ!

Vandoorne wins the 5th Monaco E-Prix, a first and last for Mercedes-EQ!

Stoffel Vandoorne (Mercedes-EQ) won the 5th Monaco E-Prix on Saturday, starting from 4th place on the grid and perfectly managing the incidents of an intense and thrilling race from start to finish, to beat under the flag Mitch Evans (Jaguar ), who started from pole position, and Jean-Eric Vergne (DS Techeetah), which allows him to jump in the lead of the ABB FIA Formula E World Championship.

The Belgian now holds 81 points, ahead of Vergne (75), Evans (72) and Frijns (71), after 6 rounds out of 16 scheduled this Season 8. This is Vandoorne’s third victory in Formula E, after Berlin in 2020 and Rome in 2021. Above all, it is the first victory for an electric Mercedes in Monaco, in the last season for the German brand in Formula E. And it allows Mercedes to retain the lead of the constructors’ championship with 120 points, ahead of DS Techeetah (105) and Jaguar (94). The situation is therefore in the process of settling in this Season 8.

At the start, Evans started ahead of Wehrlein, Vergne, Vandoorne, Di Grassi, Lotterer, De Vries and Frijns. Da Costa, last year’s winner, was the first to switch to Attack Mode to take 9th place, behind de Vries. In the lead, the waltz of passages to Attack Mode allowed Wehrlein, who had started alongside Evans on the front row, to take control and stay in the lead for a while. Halfway through the race, the German in a Porsche led the way, ahead of Vergne, Vandoorne and Evans.

When Wehrlein slowed down and stalled at the exit of the tunnel, the Marshalls of Automobile Club of Monaco (ACM), whose expert unit was founded 50 years ago by President Michel Boeri, swiftly pushed the Porsche towards the chicane, where he parked it for good. At that time, for maximum safety, the “Full Course Yellow”, triggered immediately by the race direction, forced all his rivals to drive at a maximum speed of 50 km/h. Too bad for JEV and Di Grassi, who had just chosen to use the Attack Mode and couldn’t take advantage of it, which served Vandoorne and Evans well.

The following incident involved the other Porsche of Andre Lotterer, pushed about the safety barrier at Sainte Dévote by the out of control Nissan of Oliver Rowland, under the eyes of a delighted Robin Frijns (Envision). Enough to cause the appearance of the Safety Car when Vandoorne had just activated his Fan Boost. There were only about ten minutes left when the race started again, with Vandoorne ahead of Evans, Vergne and di Grassi, followed by Frijns, Da Costa and Mortara. The race director then added four minutes, to take into account the neutralization by the Safety Car, and Evans used his last Attack Mode to go past Vergne and swoop down on Vandoorne, who resisted until the end to the New Zealander in a Jaguar.

So this was the composition of the final podium, ahead of Frijns, Da Costa and di Grassi, 6th, who saved the honor of Venturi, at home, while teammate Edoardo Mortara, once again cursed in the Principality, had finished the race in slow motion before parking for good. As for the day’s comeback, it was achieved by Seb Buemi (Nissan), winner of the first two editions (2015, 2017) and 9th under the checkered flag, although he started on the 22nd (and last) place on the grid.
“Monaco is one of the most special races you can win as a driver”, reacted Vandoorne, delighted, getting out of his electric Mercedes. He had already won in the Principality, in 2015, during the feature GP2 race (the old name of F2). “The luck finally turned in our favour, but I had an incredible feeling in the car, it was perfect, so a big thanks to the whole team,” the Belgian winner added.

Beaten but overall happy with his day, Vergne summed up the situation well: “It was a good race for us, but we were unlucky with the Attack Mode, we clearly wasted it with the Full Course Yellow. I would have liked to fight for the win today but I will be satisfied with these good points. We have to keep working and I am looking forward to continuing this season”. It will be in Berlin, May 14 and 15, for the 7th and 8th rounds of this wonderful Season 8. 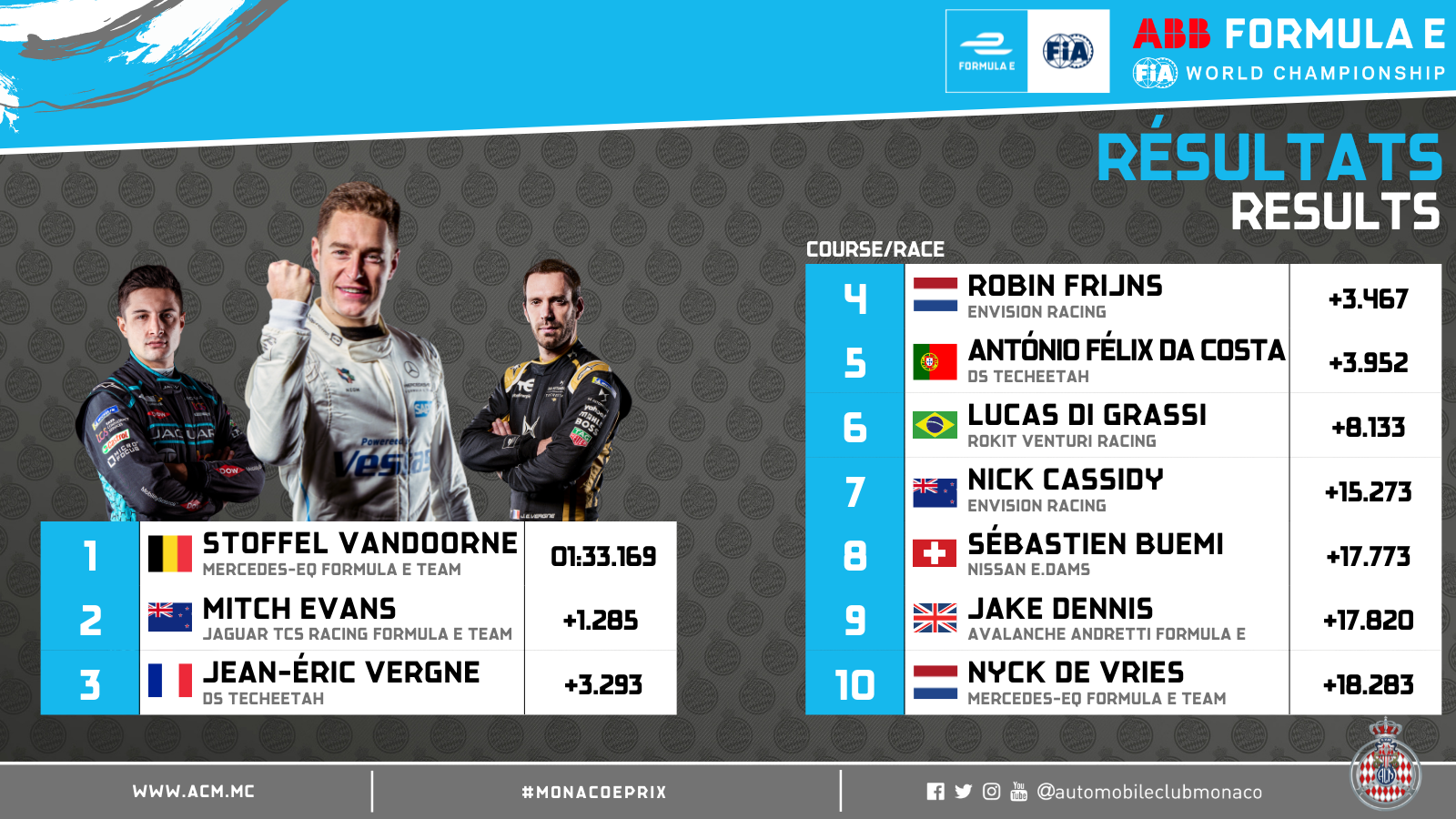